Even though we’ve been together for almost 10 years, every once in a while I realize some giant difference between me and Les that I’ve never noticed before.

This week I was thinking about the differences in the funerals between our families. I’ve been to a funeral in his family and, it was the traditional Mormon testimony kind. Next weekend we’ll be attending a funeral for my aunt and I’m sure he’s never been to anything like it.

His family used only Rook cards when he was growing up because playing cards were considered evil (lots of Mormon leaders have said so), while my family (at least half of them at some point) worked in a factory that manufactured playing cards for casinos. 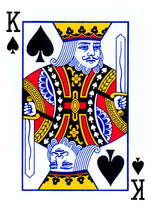